The national company Morixe and the INTI joined with the challenge of developing the new product, which will have a high nutritional contribution in proteins and natural fibers and can be used to prepare foods of common use such as baked goods, pasta, pizzas, empanadas and doughs among others.

According to a report published by the Latin American Association of Industrial Millers, Argentina and Uruguay are the countries in the region with the highest per capita consumption of wheat flour, reaching an approximate figure of 90 kilograms per year. Taking this trend into account and seeking to improve the nutritional profile of the product, the Argentine company Morixe developed together with INTI a premix for bakeries fortified in proteins and fibers.
“We seek to obtain a product that in what is known as a serving of bread (equivalent to 50 grams) will provide a quantity of proteins with a certain amino acid profile established by the United Nations. To achieve this, we had to replace part of the wheat flour with other raw materials such as yellow peas, soybeans, and dairy and egg derivatives, ”explains Mariana Sánchez, coordinator of food-related development projects at INTI.

"It is also made entirely with national ingredients, without chemical or synthetic additives and although its price will be above the brand's self-rising flour, this is not comparable because it has fortifying components that make it much more expensive. Undoubtedly, in terms of cost-benefit, it will be the most competitive flour on the market and, compared to the cost of meat proteins, the convenience is even greater ”, adds Rafael Caderosso Tobler, commercial director of Morixe, a food company that was born in 1901 and whose mission is the production and commercialization of food of the highest quality and at affordable prices for all.

The new product will be available in supermarkets and health food stores in Argentina, Brazil, Bolivia, Paraguay and Uruguay. For its development, a year was worked on its formulation and currently Morixe produces it in Benito Juárez, Province of Buenos Aires.

"With this launch we seek to provide a versatile and accessible alternative due to its low relative price compared to other products of similar nutritional value, 1 kg of our protein flour provides the same amount of protein as 1 kg of meat and 20% more than 1 kg. chicken ”, highlights the Morixe manager. 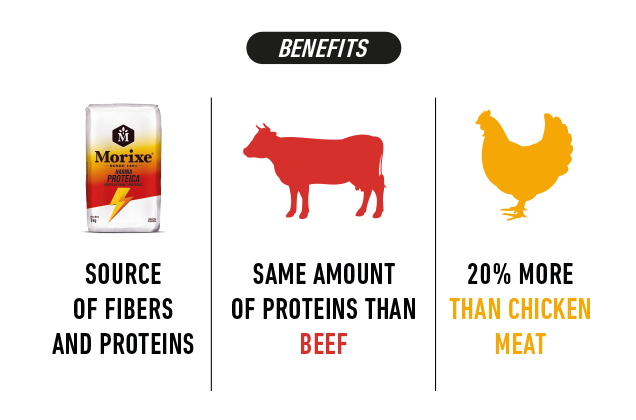 The work is in addition to the actions that INTI has been implementing to add value to a strategic industry such as food. "In addition, this is a clear example that we are a naturally competitive country to innovate locally and export our agro-industrial products," concludes Caderosso Tobler.